On the International Women’s Day, the Russian pressure group "Pro feminism" made public the results of the open Internet-voting on the Sexist of the year award. Since 2010, the award is given to individual and corporate authors of the most offensive sexist statements. .

The first prize in the individual nomination was offered to German Sterligov for his hate speech against the law on gender equality, in particular, for claiming that a woman wearing a “modest” long skirt is “genetically impossible” to be raped, and referring to women fighting for equal rights as “elderly repulsive filth”.

The 100th anniversary of International Women's Day in Russia: details of the forcibly dispersed feminist meeting at Novopushkinsky Park on 8th March 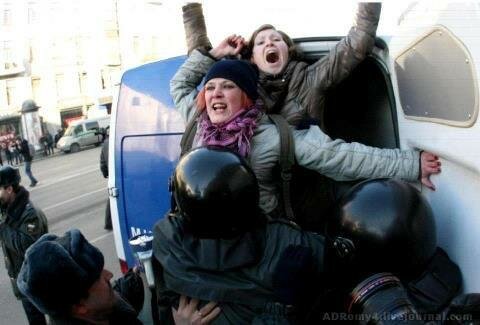 by Natasha Bitten of the activist group "Pro Feminism"

A meeting, which had been permitted and agreed upon with the Moscow government to mark International Women's Day, was dispersed by the authorities.

On March 8 2012 the political party Yabloko and a number of feminist  and women's organisations gathered to celebrate the 100th anniversary of International Women's Day in Russia at Novopushkinsky Park, Moscow, Russia.